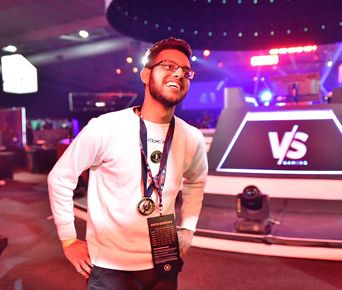 VS GAMING HOSTS THE LARGEST E-FOOTBALL TOURNAMENT IN AFRICA

VS GAMING HOSTS THE LARGEST E-FOOTBALL TOURNAMENT IN AFRICA

The show ran for two days to a record number of players and spectators who came out in their droves to take part in or watch the largest e-football tournament in Africa. With a total prize pool of R1,5 million the top 17 players each received prize money.

“We couldn’t be prouder of what took place this weekend. As the first of its kind we put on a spectacular show and brought esports to the everyday South African. Our aim as VS Gaming has always been to make esports more inclusive and open it up to a wider audience. We did that this weekend. The VS Gaming Festival is the start of something great,” says Cambridge Mokanyane, CEO of VS Gaming.

“Our partnerships for this festival show exactly what we mean by bringing esports to a wider audience. By showcasing the final matches on SuperSport, the top ten joining the Orlando Pirates esports team and by making this competition open to the public, shows we are keeping our promise to make esports open to all who want to play,” says Mokanyane.

The prize breakdown is as follows:

There were further prizes for the runners up in the four pools on Saturday and the five pools on Sunday. Each runner up was awarded R7,500.

There were six celebrity play-offs during the weekend with the winner of each match getting R15,000 for a charity of their choice.

Derek Alberts was the winner of the shoutcasting competition and walked away with R110,000 in cash and prizes. The top four have the opportunity to sign a one year contract with VS Gaming.